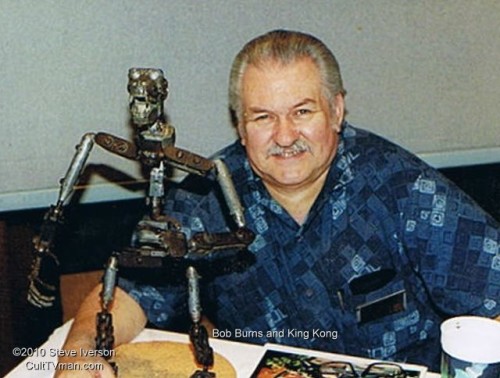 Back in 1995, Connie and I flew out to LA to attend the Famous Monsters convention.  While we were there, we  visited friends and family, went to Universal Studios, drove around Hollywood, and spent a couple days at the convention.  This was the first big convention we’d ever attended and we had a lot of fun.    There are so many stories to tell you about the show and the people that we met, that I could not even begin to start.  Rest assured that for every photo you see here, there is a good story.

Bobby Boris Picket was the highlight of the costume contest, singing The Monster Mash.  Al Lewis was the host of the show.  The guy in the Creature costume was carrying a blow up doll.  The little girl dressed like the Bride of Frankenstein won the contest.   The buy in the Nosferatu mask was reportedly Michael Jackson and I believe that it very well could have been him.  I tried talking to him and he only nodded yes or no.

I eventually had the photo of Bob Burns with King Kong blown up to 8×10 and had Bob autograph it for me.   Barbara Leigh was very nice as was Kitten Navitidad was quite fun.  She insisted on a photo with Connie after posing with me.    I had both Ray Bradbury and Ray Harryhausen sign my copy of Graveyard for Lunatics.   Harryhausen said “You don’t really believe that book is about me do you?”

We go to see the original Robby the Robot along with props from Forbidden Planet, Gort and the spaceship from Day the Earth Stood Still, the Kong and Joe Young armatures, some of Harryhausen’s miniatures, the dinosaurs from King Kong, the Lost in Space robot, the Flying Sub and so much more.

One thought on “Famous Monsters 1995”