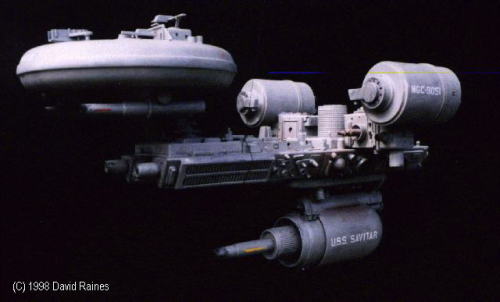 David Raines lives in Ventura, California and is just getting back into modeling. He notes, “I had been collecting parts here and there for about a year, thinking I would like to scratchbuild a spaceship. Finally I did!” David named this effort the U.S.S. Savitar, and it is named after the Hindu god of the sun.

This is an exorcise in creative modeling. “All the parts are pretty much ordinary things. For example, the main engines are inserts from a water filter (the large structure on the bottom of the ship is the filter housing). The small parts come from a tape recorder, camera ,computer, door locks, ink pens and other things. The main rails are two plastic cases for engineer’s scales. The saucer is just a couple of plastic dinner plates (lots of cutting, sanding and shaping on things though.)”

The model is painted dark aircraft grey, “with a flat black wash and some rust.” Finally, the ship was photographed in direct sunlight against a black background.