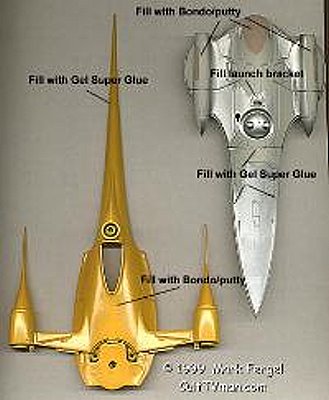 The Naboo Fighter is the Die Cast offering from AMT.  Even though it was painted, I chose to strip the paint and fill in the gaps.  I used an automotive putty produced by Bondo.  This type of putty uses a catalyst to harden the putty and results in no shrinkage and also much harder than standard modeling putties.  Prior to filling the gaps with this, I ran a metal file along all of the edges to make sure they were level.  The color is Testors Nascar Kodak #4 Yellow.  It has a slight orange/amber tint and is darker than the original color.  I think it’s a little closer to the correct color but I could be wrong.  You decide.

The Royal Naboo Starship is the Estes rocket.  This requires a little more work.  I removed the rocket tube at the back and filled the hole with Bondo again.  There are also four little wings that attach to the engines.  The slots for these need to be filled as well.  There is also a small slot for running the launch rod through that needs to be removed and filled with putty.  I may need to move the hole for the stand towards the middle of the ship as the Bondo has increased the weight of the model.  The front and back halves were super glued together and the resulting seam sanded smooth.  The outer edges also need to be filled and sanded to a much finer edge.  I will either paint the kit using Testors Metalizers or Bare-metal Foil.  I have yet to decide