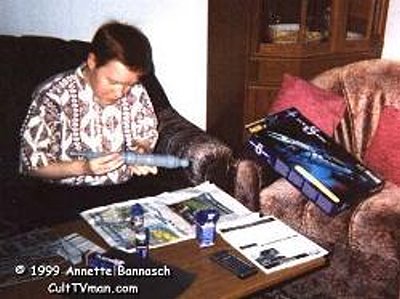 Annette Bannasch comes to us from Germany with several models that she has been working on.

I’ve  worked at some models lately and thought I’ll send you some pictures of it. You will find two pictures with me working on models (Babylon 5 Station and the X-wing fighter), two pictures: “work in progress” (X-Wing and R2-D2).  Also, one picture with the Star Trek classic phasers (one was a water pistol that I rebuilt, cut out the upper section and closed the holes) and then I have a diorama with some “men on the moon”. The figures are from AIRFIX from the early 70’s.