This week we present a Strike Cruiser from A.J. Madison.

Here’s the major difference between a (refit) Constitution Class ship and the Strike Cruiser: the secondary hull.  While not canonical by any means, the design’s sleeker, leaner look has always captivated me.  Here, is the plasticard framework of the secondary hull just prior to the addition of epoxy putty that when sanded down gives the part its exterior shape.  Only a couple of the refit Enterprise kit parts were usable here, the shuttle bay fantail and a small fraction of the original kit’s main deflector.  The addition of various indents: docking bays and RCS thruster vents were scratchbuilt and added.  The excess sticking up above the bulkheads will be removed during the final sanding phases. Roughly cut portions of a styrofoam picnic-cooler were added between the bulkheads to reduce the overall weight of the piece and the amount of epoxy needed

The bottom of the secondary hull shows the warp-nacelle pylon attachment pad and the longer, shallower fantail cutout.  I spent alot of time drafting out the shape of the cutout (it started out as a piece of flat evergreen) and the support pieces under it.  The lower sides of the shuttle bay are styrene sheet since they are both straight and flat. 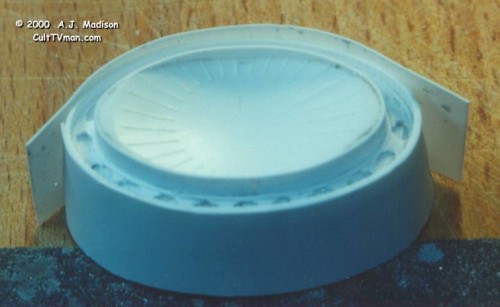 Here is the main deflector nearing completion. In the very center is what’s left of the original kit part, cut into an eliptical shape.  Various layers of sheet styrene surround the kit part, like an onion, producing the “ring of lights” channel.  The light indents were produced by lining up twenty or so tiny “I” shaped pieces of plasticard on an eliptical ledge attached partway “up” the deflector.  The picture shows the last piece of sheet being applied.  Since its the top, it hangs over the main deflector somewhat like a baseball cap visor.  The excess on the sides will be marked and trimmed to match the lower half arc.  Scrap will back the join and superglue will be used to fill the tiny gap. 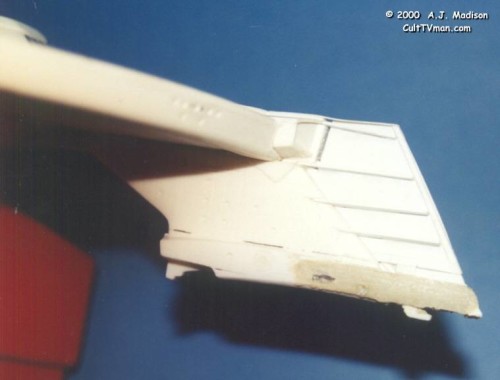 Another major element of the Strike Cruiser is its stretched “neck”.  In this picture, the photon-torpedo deck has been lengthened with epoxy putty, and the rear fin has been extended and braced for a covering of ten thou sheet styrene.  If the braces appear sloppy, that’s because they are.  The ribs were installed relatively haphazzardly, because they’ll be covered up by a plasticard “skin”.  The styrene sheet covering will be blended into the impulse drive mid-line separator and the edge of the sheet faired into the kit part with accelerated superglue and putty. 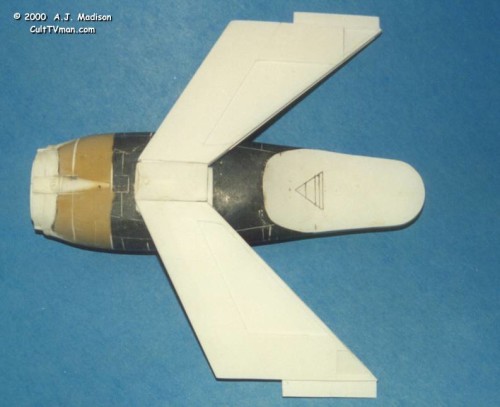 Looking like a teutonic “dead swallow” is a test fitting of just the secondary hull to the 3 part warp nacelle supports.  The tan and dark-grey metallic colors of the secondary hull are not a photographic illusion.  The dark-grey epoxy I bought for the project ran out mid-way, and in a pinch, I used some 5 year old Hexcel A+B epoxy putty I had in my supplies, but both materials fine sanded down to a seamless surface.  As I took the picture, the starboard support slipped (no adhesives at this point!); properly fitted, there isn’t any gap between the parts.  What can I say, want something done right, you have to make the parts yourself :-).  I have scribed some of the deflector grid lines at this point, but will be refined prior to a base coat of paint 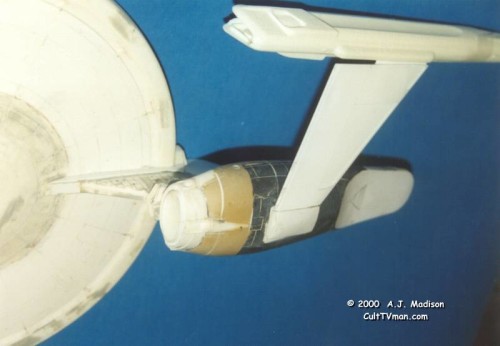 Wanting to visualize the final results, I test fitted all of the major components, minus the port warp assembly.  The modified interconnect has been attached to the secondary hull, and a kit warp nacelle dry fitted to the pylon. Alas, the kit part and the pylon need additional refinement to close the gap and to align the nacelle vertically, but nothing a No. 11 blade can’t fix in a few minutes.  But otherwise, this Strike Cruiser will soon be needing a coat of paint.